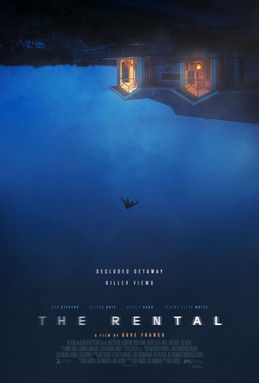 Yeah, I’m the little dumbass who fell for this movie because it had Annie in it. Literally the only reason I watched this movie was because I’m hot off a Community rewatch and I’m hot for Brie. As witty, original and intelligent as that show is, The Rental is just as dumb, boring and unoriginal.

Brie, along with three generic actors, take a weekend away in a remote rental by the sea, surrounded by the woods. There, they’re accosted by creepy, slightly racist landlords, cheating spouses and drugs. Halfway into the film, it is revealed that the creepy host is not the murderer who’s planted cameras in the shower, and people start dying off-screen. The final act of the film follows the two survivors as the obliviously blunder about the property until they’re unceremoniously killed off by a slow, lumbering, faceless murderer. Sort of like another stupid slasher I saw recently.

The film isn’t scary or innovative, even though the idea of having the murderer plant cameras around someone else’s rental property is pretty creepy. Maybe it’s because I’m a man who doesn’t care if someone’s recorded me in the shower, or maybe because I don’t do drugs, or maybe because I don’t cheat on my spouse. I just didn’t resonate with the film, even though I’ve taken multiple weekend getaways along the coast with four friends and a lot of booze.

It’s a straightforward film with some decent cinematography and pretty decent human drama set up. There’s also no payoff or true exploration or discussion of this drama, the issues or even any of the characters. There’s potential, but the tonal shift once people start dying also kills the momentum of the film. You’re not scared, you don’t care and you’re left scratching your head in confusion and your balls because you thought you’d get more Brie.

You can stream The Rental on Netflix.

Previous: ‘The Gray Man’ is another generic action flick with a modicum of character
Next: Hulu’s “Prey” is the best action film of 2022

I’ve written some other stuff: