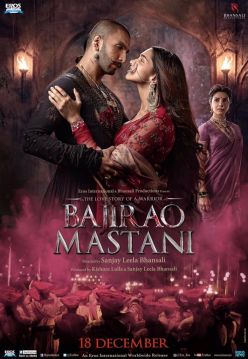 The film Bajirao Mastani is a beautiful, gilded romantic expression of Indian art, architecture, clothing, music, poetry and values. If you’re not familiar with Bollywood, this is a fantastic but strictly aesthetic examples of the best of film to come out of India in a long, long time.

The Problem with Bollywood

I don’t often watch Bollywood movies, but when I do, I don’t really care to review them. There’s a deeper, nuanced conversation to be had when discussing films that originate from different cultures and for different people, a topic that gets as deep as defining the characteristics of film genres themselves. Until I can have that conversation, I feel like my reviews for Bollywood- or any international film (from the perspective of an American)- will fail to have the nuance of introspection and will fail to do justice to the film, for the audience it was intended for and for the audiences it wasn’t intended for.

I’d still like to talk about this film, though, as it’s one of the first times I’ve voluntarily, soberly, agreed to watch a Bollywood movie that wasn’t a rewatch of something from my childhood. I distinctly remember the Salman Khan movie Kick being the last time I did, and it was so terrible that it turned off all Indian cinema for me- for years. Kick is the story of a daredevil criminal who lies and deceives his way into a relationship with a character played by an actress who literally cannot speak the language the movie was shot in. A pretty glaring example of the film’s executives’ priorities is to have a hot woman instead of a talented woman as the female lead. Further, the film ends with the criminal beating the cop and continuing his stupid antics. No growth, no lessons, no character arc, no cinematography, no direction. Just a sequence of bloated, CGI, sexist events which revolve around murderer Salman Khan’s ego. This movie is #19 on the list of films that made the most money in Bollywood.

In contrast to that shitshow is Bajirao Mastani, a film based on a Marathi novel, following a heroic, successful warrior in Peshwa Bajirao. The film is a colorful, musical, opulent extravaganza of Indian heritage. It follows the story of Bajirao as he relieves a castle from a siege, and inadvertently promises to marry Mastani, the daughter of the Hindu king and his Muslim consort. Mastani, played by Deepika Padukone, falls deeply (and immediately) in love with Bajirao and stalks him back to his home, then harasses his family into accepting her, despite Bajirao having already been married to Kashibai. Bajirao (also inexplicably) falls for and marries Mastani, setting off a series of hijinks that culminates in both Bajirao and Mastani dying at the same time in a romantic, magical way. The end.

The Best of Indian Cinematic Spectacle

The story is flimsy, but I don’t think that was the point. The greatest strengths of this film are actually the grandeur, cinematography, set design and costumes. Each time our heroines appear on screen, they cast a whole new cultural ripple throughout India, with their heavy, gaudy jewelry, their flowing, immaculate saris, the glittering, gilded castle halls. The film is a visual spectacle, a cacophony of color and passion. It seems that this film was released simply to show off the sheer artistic genius of Indian auteurs who were able to bring this story to life.

In addition to how stunning the film is visually, it also has an insanely poetic script. Each line is premeditated, romantic and elegant. While those of you who cannot speak or understand Hindi will actually miss out on this incredible writing, you can assume it’s like Shakespeare on screen.

A facet of Indian cinema that’s, unfortunately, absent in American cinema is the absolute weight of certain pieces of dialogue. Indians will repeat and reuse badass, romantic or memorable dialogues in common vernacular for years. Powerful dialogue reverberates throughout the populace and can often be the sole reason why people see a movie- to watch their favorite actors deliver a single, powerhouse of delivery on a single line of dialogue. While there have been fantastic lines in film that live on in the American zeitgeist, it’s hard for me to explain the difference in how much more dramatic things sound in Hindi. The script of Bajirao Mastani is literally only these lines.

The greatest myths of India, like the Ramayan or Mahabharat, are poems- some of the longest, most complex poems in the world. Indians fucking love their poetry. This film understands the cultural importance of poetry and has used it to elevate what should be a lukewarm story into a self-contained saga. It’s gorgeous and satisfying and moving and eloquent and romantic all at once.

My issue with Bollywood’s obsession with subpar action is that it’s so prevalent in all of their films. In a film as dramatic and colorful and poetic as Bajirao Mastani, I hate that the climax of the film, which rightfully is fairly emotional, is preceded by a stupid action climax, where Bajirao 1v1’s an entire army and slices through them like a fucking Power Ranger. It was annoying and unnecessary and stupid and gory.

I want to explain better how Bollywood differs from Hollywood and why, but it would involve a more careful study of more Bollywood films across their recent releases to identify specific points and trends. Then, I’d have to delve into the cultural significance of Bollywood on the Indian people and the way India perceives the rest of the world, especially America. At the very root of things, Americans and Indians have such different ideals and values that it becomes hard for Americans to even fathom that certain actions and reactions are actually normalized in India- and vice versa. I could then explain why Hollywood films cannot leave a lasting impact on the Indian audience and why Hollywood sucks up to China, but not India, despite both countries having large populations and a robust, existing film culture. I could go on and on and I’d love every moment of it, but again… you may still not understand. Doesn’t mean I won’t try!

Bajirao Mastani was a gorgeous film with an incredible script and an excellent soundtrack (that I haven’t even talked about in this review). It’s a great surface-level look at Indian cinema at its best, despite its weak plot, sexist (western) values and flat characters.

I may be starting a podcast with my friend. She shows me great Bollywood, I show her great Hollywood, then we sit and discuss. Leave a comment below if you’d be interested in something like this.

You can stream Bajirao Mastani on Eros Now or rent it from Youtube.

I’ve written some other stuff:

Previous: “Jonah Hex” is the most boring comic book movie I have ever seen. Not bad. Just boring.
Next: Why “Zindagi Na Milegi Dobara” is one of the best Bollywood coming of age films